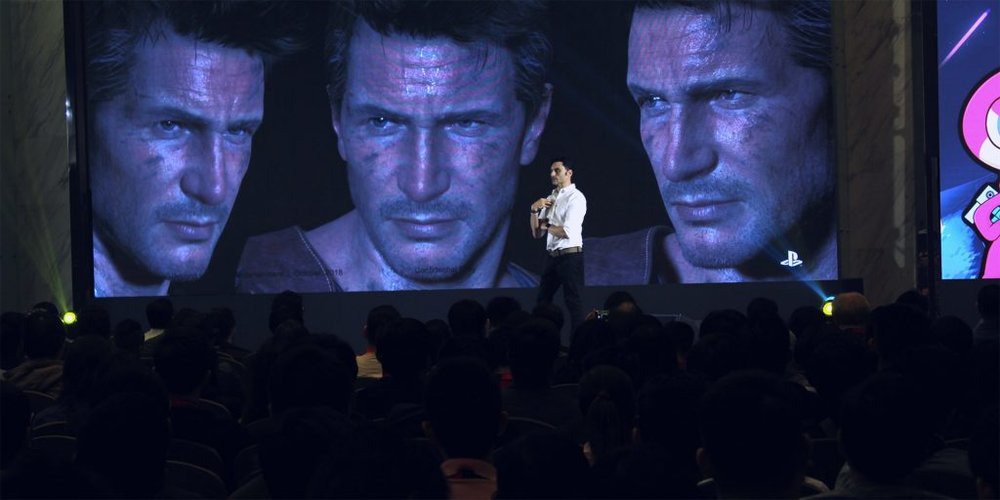 Level Up KL 2018 started out with a keynote by Michael Mumbauer, Senior Director of Visual Arts for PlayStation. Mumbauer is a twenty-year veteran of both film and games, working across properties such as The Polar Express, Monster House, Uncharted 4, God of War, and The Last of Us, specializing in performance capture and creating digital characters.

Mumbauer reminded us that every ten years, game development costs increase ten-fold. By 2020, the typical AAA game will run an estimated cost of $200-250 million USD.

Mumbauer also spoke on the importance of visual production, the idea that in the very near-future, movies will be made in-engine, utilizing game engine development tools. The goal is a real-time set rendering of environments and props, as well as real-time facial capture. If this can be accomplished, the cost and time to create will be reduced.

He concluded by positioning that, Malaysia, with its young talent and resources, could be ripe for the future of visual production. His argument was that game developers would become experts and specialists in the visual production field, and that film production could utilize their specialized talents.

From the Streamline Game’s side, SLG was out promoting Nightstream, both in a shared booth with MyGameOn, as well as a table on the exhibit room floor. Streamline Games was also passing out physical copies of issue number one of the Nightstream comic, which was also designed and printed in-house. Some of the same Streamline Games artists that worked on Nightstream (Kelly Tan, Lynette Wong, Ahmad Hilmi, Sai Foo) also created the comic – everything from penciling to lettering and inking and coloring. 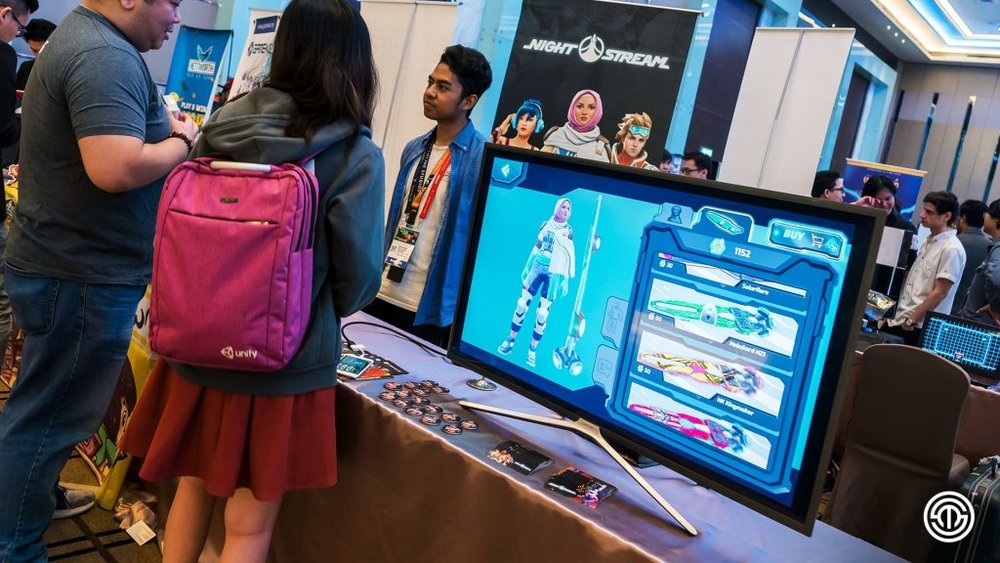 Given the fact that Malaysia’s game industry skews on the younger side, it makes sense they would want to advise and mentor their talent. Given the state of the games industry in 2018, and how many of its employees have been treated, surviving the games industry has become a contentious topic.

David Lam, Senior Producer of External Content at Turn 10, gave advice on how to not only survive the industry but manage to thrive in it, based on his experience of almost twenty years in the industry.

The usual developer skills were recommended, such as curiosity, a determined work ethic, and adaptability, but Lam also mentioned the importance of soft skills such as social skills.

He also discussed the stages of a games industry career: being happy to be there, grinding it out, becoming a leader or a specialist, impacting through scope and influence, and giving and receiving.

The remainder of his talk was on choosing and prioritizing a work/life balance. He emphasized the importance of choosing your boss, seeing every new job as an opportunity to reinvent yourself, observing your team’s culture, and realizing that you have a choice to choose the life you want to live.

“AAA is a moving target. It is always ambitious.”

Outside of the Nightstream team, Streamline Games was represented by General Manager Stefan Baier, who presented his talk, “AAA Development in Southeast Asia.” The emphasis was on the rising middle class in the SEA region, with the majority of the world’s middle-class coming from the Asia-Pacific region within the next ten years.

SLG also touched on a couple upcoming projects: Bake & Switch, a game tentatively scheduled for 2019, and Unbound Oceans, a much bigger, more ambitious project that is still a few years away. Bake & Switch is a local multiplayer game for the Nintendo Switch.

Unbound Oceans is the other end of the spectrum: a big Unreal Engine sci-fi first-person shooter, which has the player dropping from their ship into different levels, completing objectives, and coming back to their ship for potential upgrades and new assignments, either alone or in co-op mode. This was SLG’s first public showing of Unbound Oceans, although they have been chronicling its development on their blog.

In between Bake & Switch and Unbound Oceans, SLG spoke of doing additional smaller games, with the goal of shipping one game a year. They didn’t have anything specific planned to come out in between Bake & Switch and Unbound Oceans, but mentioned that internal teams will experiment and move forward with the best idea. It seems to be a shift in thinking on how SLG does internal development of their own IPs.

SLG briefly teased a clip of Hyde as well, a very early third-person action game set in the Victorian era, showing off some early transformation animations. Hyde hasn’t officially been announced, so this teaser was the first time it was shown to the public. There was no further word on when Hyde would officially be unveiled, but it seems to be a few years off.

Divinity series creator Larian Studios was represented by Spencer Low, a local Malaysian who now works overseas as Larian’s Business Development Director.  Low presented, “Creators of the Divinity series – the Ups and Downs of an RPG Studio.” It was a talk that spoke of the studio’s problems in the past with publishers, which lead to a long stint of work-for-hire and educational game development for Larian, all in an effort to survive. Eventually, they were able to pull off Divinity: Original Sin, which was successful enough to lead to Divinity: Original Sin II. Now Larian employs 160 people spread across four studios in multiple time zones. Between the original Belgium studio and the other studios in Russia, Ireland, and Canada, Larian works around the clock, with only three-to-four hours of downtime a day.

Soleil Ltd. President and CEO Yoshifuru Okamoto presented, “Console Developers in Japan: Now and the Future,” which was a candid look at Japan’s rise to dominance as the epicenter of video game development, prior to their fall to grace during the Xbox 360 and the PS3 era of development. While Okamoto mentioned that the PS3 while notoriously difficult to develop games for, he also acknowledged the many failures of the Japanese games industry during the era.

While the western approach to game development was sharing knowledge and tools, Japan had a far stauncher, more conservative approach to game development. Unity and Unreal weren’t common tools, so most games had their own custom engines built. Events like the Game Developers Conference were pretty much non-existent in Japan, so knowledge was not easily shared. Poaching was a fear for many companies, so developers were often credited under pseudonyms, meaning that talent often went unrecognized. And when the HD generation brought a demand for more realism to games, Japan was still more comfortable with an art style based on Japanese animation and manga.

Other issues brought up was Japan’s lack of English skills, as well as every company having different development processes and strategies.

As a result, many in Japan’s games industry pivoted to developing games for smartphones.  This was bolstered by the fact that the Japanese often face very long public transit commutes to and from work each day.

“We worked with local company Streamline Studios, one of our biggest assets.”

Okamoto concluded his talk by mentioning that Japan had not given up on console development and noted that recent titles such as Dark Souls, Nioh, NieR: Automata, and Yakuza proved to be popular overseas. For Okamoto, a developer whose experience is based in console action and adventure games (his previous credits include games such as Monster Farm / Monster Rancher, Dead or Alive 4, Ninja Gaiden 1 and 2, and Devil’s Third, as well as the newly released Naruto to Boruto: Shinobi Striker), this was obviously a point of pride.

Soleil was founded in 2008, in the midst of Japan’s casual game craze. Yet, Soleil focused on high-end game development and learning the Unreal Engine, and developing the skills needed for console game development. As a result, they feel confident in their ability to develop online action games.

Okamoto believes the era of 100% internal development inside Japan is over. While Japan has an aging population, Southeast Asia as a much younger population. Due to SEA’s English proficiency, as well as high education standards, he believes SEA is not only a key market for potential consumers, but also for finding talent. Malaysia, being a central hub of SEA, is a convenient location. And Malaysians enjoy and are familiar with not only western media content but eastern media from countries such as Japan and Korea. Okamoto mentioned that reasons such as these have led to Soleil working with Malaysia’s Streamline Media Group.

The annual SEA Game Awards occurred at the end of Level Up KL like they do every year. Our division Streamline Games soft-launched their mobile runner Nightstream earlier this year in Malaysia. Nightstream was nominated as a finalist for three categories at the SEA Game Awards: Best Innovation, Best Game Design, and Best Technology, and came home a winner for the Best Technology Award, which recognizes the overall technical quality of a game, such as graphics programming, artificial intelligence, and networking. Streamline Media Group is very proud of the Streamline Games team and their success.

Overall, Level Up KL continues to grow and attract talent from around the world. At the closing remarks, it was announced that over a 1,000 people attended this year’s event, which is up from about 800 last year. Guest speakers from major companies continue to be attracted to the event, whether it’s conducting a Unity workshop, speaking on the potential of the SEA gaming market, or enabling new business connections.

Next year’s event dates have already been set, so mark your calendars: Level Up KL 2019 is set for November 2-6th.